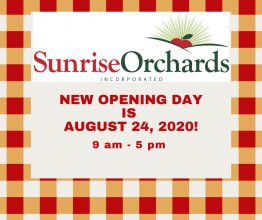 Welcome to our 2020 Season Opening Day! OPEN 9 AM - 5 PM. Delicious early season apples are in stock including Dudley, Paula Red and a limited supply of Rave apples. The Apple Corner Bakery has freshly baked apple cider donuts and cookies available. All our baked goods are fresh and hard to resist! Some say our donuts are a legend.  Each season we add new food products and unique gift items for your shopping pleasure! 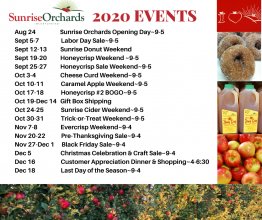 We've made changes to our events and updated our event schedule for this year, to keep our customers and staff safe. You'll actually find many more events however we are unable to provide any apple or food samples, nor single serve donuts, coffee or hot cider. Thank you for understanding. We look forward to brighter days ahead, when we can offer samples and single served food items. Thank you for your support and business. We look forward to seeing you for the 2020 Sunrise Apple season! 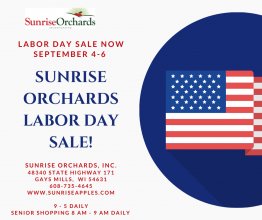 Check out all our specials this weekend for our Labor Day Sale!  September 5-7th.  Open 9 am - 5 pm. 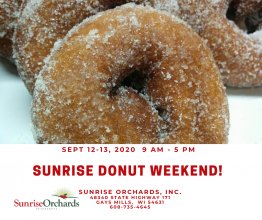 Apple Cider Donuts. That’s what we’re known for! Some say our donuts are legendary!  Check out our in-store specials this weekend. 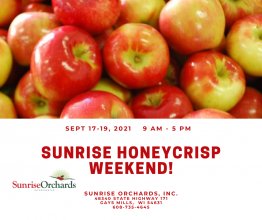 We're so excited because this is the first weekend the Honeycrisp apples will be available!!  We know you've been waiting for them!  Stop in and shop early. 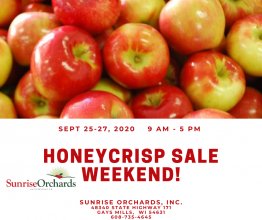 ALL Honeycrisp apples including #2 grade apples, are 15% off Friday - Sunday, 9 am - 5 pm.  Number 2 grade will be in very limited supply.  Buy early! 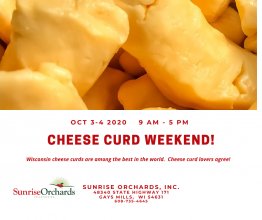 Welcome to Cheese Curd Weekend!   Where we’ll have specials on fresh cheese curds from 9 am - 5 pm!!  Plus, visit the Curd Mobile who will be dishing up fried cheese curds – a Wisconsin favorite!

What do we like about cheese curds?  Everything, right?!  They’re tender and fresh in flavor.  They make a squeaking noise against your teeth when you eat them.  It they don’t squeak, it either isn’t fresh or isn’t real cheese curd.  But if you just need that squeak, you can take steps to get it back. Sometimes putting the curds in the microwave for a few seconds will make them squeak again. They aren't quite the same as a fresh curd, but they are still fun.

A cheese curd isn't a special kind of cheese. It's just a young cheddar, one that hasn't been aged at all. These curds are separated from the whey during the cheesemaking process, and instead of being molded for a future cheese wheel, they're sliced up and bagged to be sold right away.

Want to know more about Cheese Curds?  According to the website What's Cooking in America Cheese curds, a uniquely Wisconsin delicacy, are formed as a by-product of the cheese-making process.  Most cheese curd (at least the ones made in Wisconsin) are a cheddar cheese product.  Some can be made from mozzarella, Colby, or Monterey jack cheeses.

Every restaurant, bar, and bowling alley in Wisconsin seems to serve them.  They are usually a monster-sized appetizer, and they compete with French fries as a side order with sandwiches. They are also a favorite at local fairs, festivals, and fishing lodges. It is said that the folks in Wisconsin crave their curds.

History:  Cheese curds are little-known in locations without cheese factories, because they should ideally be eaten absolutely fresh, within hours of manufacture. They have about the same firmness as cheese, but have a springy or rubbery texture. They are usually orange in color and are little nubs of cheese, roughly the size of peanuts, which, if very fresh, squeak when you bite down on them.  The “squeak” is a very high-pitched sound.  Unlike aged cheese, curds lose their desirable qualities if refrigerated or if not eaten with a few days.  The squeak disappears, and they turn dry and salty.  If you find them in supermarkets, they are probably a few weeks old and inedible.  Cheese curds have become so popular that many Wisconsin cheese factories make the curds daily to meet the demand of cheese curd lovers.

Wisconsin is the leading producer of cheese in the United States, with much of Wisconsin’s cheese made at small, family-owned and operated cheese factories.  Cheese making began in Wisconsin around 1840, when word of Wisconsin’s rich farmland spread throughout Europe and the United States.  Settlers from the eastern dairy states of New York and Ohio, as well as immigrants from Switzerland, Germany, and other countries in Europe, brought their traditions of cheese making and secret recipes to Wisconsin.  By 1922, there were more than 2,800 cheese factories in the state. Wisconsin produces over 2 billion pounds of cheese per year, and it’s cheese is considered among the best in the world.

What a GREAT sale!! Buy one box of #2 apples, and get another FREE!!  Enjoy the savings.  Stock up!!  Refrigerate apples when you get back home. 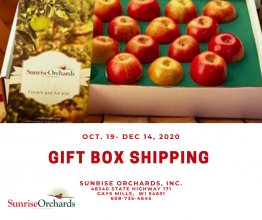 At Sunrise Orchards, we grow the finest apples, hand-select each item and create a customized gift box. With mouth-watering fresh picked apples and specialty food products, we create the ideal gift for everyone on your list. A complimentary gift card, with your personalized message, is included. Give the gift of fresh-picked apples delivered right to the front door of everyone on your list. They’ll love the rich delicious flavor of our Wisconsin apples! Place an online order or print and complete the Gift Order Form and return it by: fax 608-735-4640; email sunrise@mwt.net; or mail.  You can also place your order by calling us at 608-735-4645.

BUSINESS GIFTS: Sunrise Orchards Apple Gift Boxes are a perfect gift to reward and recognize employees, valuable customers and associates. When it’s time to send something special to your clients and employees, our customized apple gift boxes are sure to delight. Place an online order or print and complete the Gift Order Form and return it by: fax 608-735-4640; email sunrise@mwt.net; or mail.  You can also place your order by calling us at 608-735-4645.  Your business associates will be thrilled with a gift from Sunrise Orchards!

SHIPPING: Each gift box is carefully hand packed in a special foam-filled protective box, to ensure arriving in perfect condition. Our apple boxes are shipped each Monday beginning October 19th through December 14th. We are unable to ship apples to CA or AZ, due to their state regulations and apologize for any inconvenience. We can ship our specialty food products to these states. WE RESERVE THE OPTION TO DELAY SHIPMENTS DUE TO VERY COLD WEATHER. You may also pick up the gift boxes directly from Sunrise Orchards.

SHIPPING METHODS: New this year is a 12-apple gift box mailed via USPS Priority Mail, to states outside of Zone 1, which lowers shipping fees. This year all boxes going to Zone 1 (WI, IL, MN, SD, ND) will be sent by Spee-Dee Delivery Service. All other boxes will be sent by UPS.

PRICING: All the pricing information is located on the Order Form.

If apples are out of stock or the quality is not up to the gift box standards, Sunrise will substitute a similar variety. 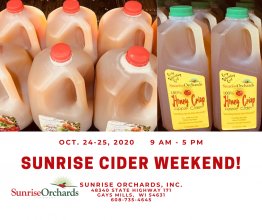 Sunrise Honeycrisp 1/2 gallon cider, will be the same price as the regular cider half gallons!  Plus, take advantage of the BTGO SALE when you buy two gallons of regular cider, get one FREE!  October 24-25th from 9 am - 5 pm. 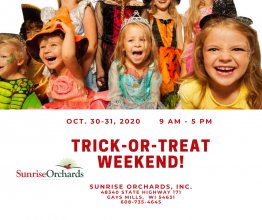 Children dressed in costumes can trick-or-treat at Sunrise! 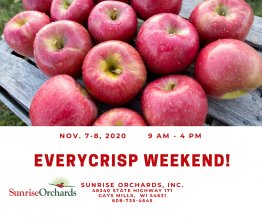 Welcome in our NEWEST & FAVORITE apple the Evercrisp.  Great in November but even better stored in your refrigerator until January or later.  Some say this is way better than Honeycrisp.  Just sayin!  November 7-8 from 9 am - 4 pm. 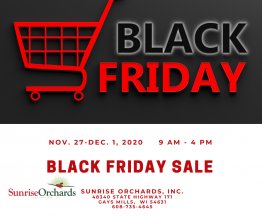 Take advantage of ALL the sales during our Black Friday weekend sale Nov 27- Dec 1 from 9 am - 4 pm! 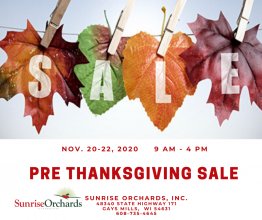 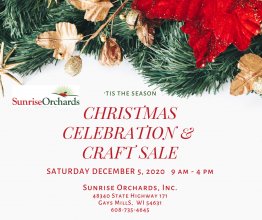 Come enjoy this festive time of year and do your holiday shopping including the gift shop and our craft sale with local aratisans.

Last Day of the Season